The HERIWELL Team - IRS+ACUME / ERICarts / AEC - is happy to announce the conclusion of the first phase of the project on cultural heritage and societal well-being, realised together with experts from across Europe (many of them members of the ERICarts Network). The Inception Report with the conceptual framework has just been published by ESPON EGTC on its website. The next phases of the research focus on investigating the most relevant societal domains where impacts of cultural heritage can be observed as well as on the methodological framework, including an in-depth study of relevant data sources. Later in 2021, a number of case studies will test the methodology and should provide insights on how different target groups on the local or regional level (including residents, tourists, migrants and minorities) are involved in activities related to both tangible and intangible heritage. The final HERIWELL report is planned for Spring 2022.

To remain updated on the development of the HERIWELL project you can sign in here or join our Supporting Partners network by completing this form. Comments or additional contributions are greatly appreciated and could also be directed to wiesand@ericarts.org.

ERICarts successful in an EU tender

29 April 2020: A European consortium - ERICarts with Italy-based IRS (project leader), AEC and ACUME - has won the tender for a 2-year investigation on "Cultural heritage as a source of societal well-being in European regions" (short: HERIWELL). A first overview highlights the dimensions of this large-scale project, which has been issued by ESPON EGTC and is co-financed by the European Regional Development Fund (ERDF). Over 40 thematic or country experts and other European specialists - the majority of them from the ERICarts Network - will be involved. The main goal is the development of a pan-European methodology and territorial analysis of impacts of cultural heritage that can be associated with "societal well-being", including but not limited to quality of life, social inclusion and educational benefits. COVID-19 effects will be taken into account in the study. We will keep you informed about important steps or results and would appreciate to learn more about your views or experiences regarding this topic.

The ERICarts Institute considers bidding in the EU "Creative Europe" Programme which would, if successful, include opportunities for members of the ERICarts Network. Details about the planned TAA project, that is to support the mobility of arts and media workers, can be found here. However, we still need additional partners (e.g. NGOs, governments or a foundation), investments in the range of ca. 40,000 € - are needed. We look forward to your suggestions!

15 Years: The Compendium of Cultural Policies & Trends in Europe

When it all started in May and June 1998, the perspectives of what was to gradually develop into the "Compendium" www.culturalpolicies.net, as we know it today, were quite blurred: The ERICarts Institute had responded to a call for tenders issued by the Council of Europe, indicating that the planned new information tool should, at its best, take the form of a "database designed to act as an interactive, multilingual electronic space on the Internet", given that "the burden of bureaucratic procedures or high costs" should be avoided and up to date content secured. However, these and some other ideas could not be realised at once: Following an internal "0-number", later in that year, the first regular Compendium edition of 1999 came out as a loose-leaf-collection with 14 country profiles, published by ARCult Media.
Only after a 'probation period' of three more years, the Compendium could be fully established as a comparative, Web based information and monitoring system that is jointly run by the Council of Europe and ERICarts together with a dedicated "community of practice" of experts and government specialists, based on a grid with standardised specifications as well as on the feedback of users and advisors. Again and again, the Council of Europe proved to be a challenging partner, constantly on alert to see political issues or changing priorities being reflected in the system or suggesting new features and working methods. This fresh impetus as well as the support from many European governments, foundations, networks and universities kept the Compendium alive, turned it even into a model for information systems with a global outreach, such as www.worldcp.org.
Reason enough to say thanks to the many contributors and supporters, which happened at the 12th Compendium Assembly with Public Forum on 12/13 December 2013 at the "Architekturzentrum" in Vienna.
More information on Compendium events is available on the Web platform as well as on its Facebook extension.

Meeting in Amsterdam on 14 December 2012 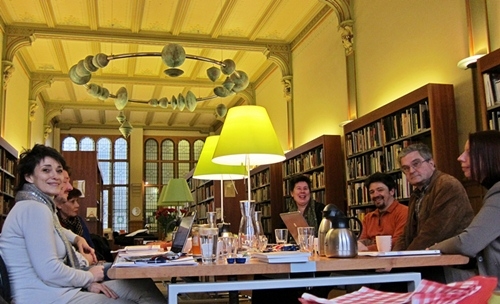 All ERICarts Associates took part in a strategy debate of the Board of Governors, held at the Boekman Foundation in Amsterdam.

In the picture from left to right:   Vesna Copic (ECURES e.V.); Olivier Goebel (ERICarts Secretariat); Ritva Mitchell, President of the BoG (CUPORE);   Ineke van Hamersveld (Boekmanstichting); Rui Gomes (Observatorio das Actividades Culturais); Andreas Joh. Wiesand (Executive Director); Susanne Keuchel (Zentrum für Kulturforschung).
The Board discussed problematic issues (e.g. current tenders of the EU or institutional partnerships with universities), highlighted the Council of Europe/ERICarts Compendium as a "flagship project", and advocated new initiatives prepared by the Secretariat (e.g. the "Helsinki Participation Research Process" or the "ABC Directory") as well as an increased collaboration to assist projects of the Associates with regard to their potential "European dimension". 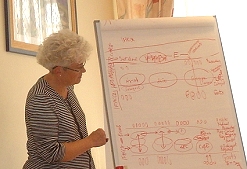 Decisive steps towards the launch of a global Internet information and monitoring system on cultural policies and trends based on the Council of Europe/ERICarts COMPENDIUM experience were taken September 5 at a preparatory meeting of different stakeholders in Brussels. Sarah Gardner, Executive Director of IFACCA (upper picture), explains the intended "federal" structure which foresees national profiles written by experts in collaboration with governments; regional coordination, quality control and funding assistance by IGOs, foundations and/or networks; and an international exchange and capacity building platform to be provided by IFACCA with the support of the ERICarts Institute, where the results of these exercises will be orchestrated. In the spirit of the OPEN COMPENDIUM initiative, some important steps towards internationalisation had been taken earlier, including e.g. successful implementations of the country profile grid in 8 Arab States and in Australia.

Together with the Centre for Strategy & Evaluation Services (CSES), the ERICarts Institute conducted a study for the European Commission on the "Contribution of Culture to Local and Regional Development as part of European Cohesion Policy". In an effort to  involve as much practical experience from the field as possible, over 80 case studies were collected and edited by  the Institute (in charge: Olivier Göbel), several of them also by ERICarts' partners Péter Inkei and Jà¡nos Szabà³ (BudObs).
Over 100 experts involved in culture-based projects, officials responsible for developing or applying cultural or Structural Fund policies or people with a particular interest in how cultural activities impact on the economy and society participated in the study by either
- Providing information on cultural projects that have received EU Structural Funding and were successful or innovative; or
- Attending a Seminar in Brussels which examined trends and evidence from projects funded over both the 2000-06 and the current programming periods.

The study, led by Mike Coyne (CSES), resulted in a number of conclusions and tools.  At the ERICarts Institute,  methodological and content input was coordinated by Andreas Wiesand who also presented some of the results and additional information on the issue at different European conferences.

The study of the ERICarts Institute for the EU-Commission focuses on programmes and schemes supporting or influencing the mobility of cultural professionals in Europe.  The project began in April 2008, the final report was submitted in October 2008. The study was coordinated by Andreas Wiesand and Danielle Cliche with the assistance of Olivier Goebel; it is based mainly on existing resources, on information gained from national correspondents in the 35 participating countries, and on the contributions of six key experts: Suzanne Capiau, Rod Fisher, Ilkka Heiskanen, Dorota Ilczuk, Ritva Mitchell and Dimitrije Vujadinovic. The study and additional material can be found on the website www.mobility-matters.eu - the Executive Summary in English, French and German can also be downloaded here.

In preparation for the 2008 UNESCO World Report on Cultural Diversity, the ERICarts Institute assembled information and data on how cultural diversity is interpreted in national cultural policy frameworks and structures in Europe. Country specific information can be found online through the Council of Europe/ERICarts: Compendium of Cultural Policies and Trends in Europe, 8th edition, 2007.

More information on the goals, the proposed conceptual framework and the main activities leading to the realisation of the 2008 UNESCO World Report is available from the UNESCO website. It provides a list of the members of the advisory committee of experts and board of governors responsible for the report.

The Status of Artists in Europe

In 2006, the ERICarts Institute has produced a comparative study for the European Parliament on the economic and social frameworks for artists in Europe, with particular emphasis placed on mobility issues.  The study identified common challenges facing artists with regard to labour, tax and social security legislation and innovative measures which countries have adopted to help artists overcome these challenges.  Members of the research team were:  Suzanne Capiau, Danielle Cliche, Vesna Čopič, Ritva Mitchell and Andreas Wiesand.

The study is available for download in English and in French. An additional paper was prepared by team member Suzanne Capiau on "Mobilité des artistes et securité sociale".

In 2007/2008, the study has fuelled debates and proposals on the situation of artists and the mobility of cultural professionals in the European Parliament, the Council and the Commission.